Robusta coffee cherries are bunched like grapes on their trees in the hills outside Dalat.

Vietnam’s central mountains are country’s backbone, running hundreds of kilometres in a north-south direction.  Tropical mountains just happen to make wonderful coffee-growing territory, and that’s just what the French had in mind when they first came here.   In the north, around Buon Me Thuot, Arabica is grown.  In the south, around the old hill station town of Dalat, robusta is the coffee crop of choice (the area is actually better known for its flowers).

After Brazil, Vietnam is the world’s second-largest exporter of coffee, shipping some 21.6 million 60kg bags annually. But farming here remains small scale, and this is a Communist country. The government owns the land and leases it back to the farmers who belong to cooperative processing plants. 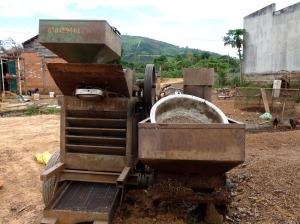 The hills are steep, diving into gullies and glens.  It looks like treacherous terrain, but this is where coffee grows.

The trees live up to 20 years and take 3-4 years to bear fruit.  Once the cherries are picked, they are dried in the sun for 4-5 days. This is one near to the farm, often in villages, on patches of concrete or asphalt adjacent the road.  For the next stage of production, the villagers differentiate between the good stuff and the cheap stuff.  Cheaper coffee is roasted with the husk still on, but cherries that are destined to become good coffee will be run through a de-husking machine first.  Once the husk is removed, only the bean remains.  The husks are re-used, as fertilizer, fuel or feed for the village’s collection of free-range chickens.

The French may have brought coffee to Indochine, but the Vietnamese have taken to the roasted bean.  Readers are likely familiar with the Vietnamese style of coffee, where richly roasted cheap beans are decocted slowly in a drip filter into a glass cup with condensed milk at the bottom – the process is exactly the same in Vietnam as it is back home.

There are several major roasters in Vietnam – Buon Me Thuot, Trung Nguyen and Highlands Coffee.  Most roasters in the country, however, are tiny.  The one pictured here is in an innocuous café in the centre of Dalat town.  In order to differentiate their product, these roasters will sprinkle the beans with a small amount of flavouring – usually chocolate, vanilla or chicory.  This allows each roaster to have its own character, and customers remain loyal to the one they like best.

The most prized variety is ca phe chon, the near-famous weasel coffee that passes through the enzyme-rich digestive tract of a palm civet.  In Vietnam, this is usually with farmed civet, so it is not exactly ethical – their living conditions are reportedly poor.  In Dalat, ca phe chon goes for around 10,000 dong for 100 grams, and it’s about three times that price in Saigon. 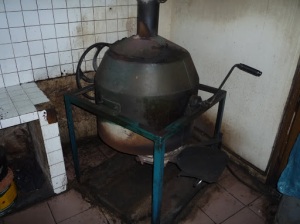 The coffee ritual in Vietnam, oddly, begins with tea.  This cleanses the palate and prepares it for the coffee.  The coffee itself is a sweet, viscous blend of inky coffee and condensed milk.  It is uncommon to get a black coffee in Vietnam, though you could try.  At night, the country’s coffee shops are filled with couples, who sit quietly in near blackness, taking coffee and conversation.  In the daytime, the shops are more convivial, and there are a lot of great ones in Hanoi in particular.