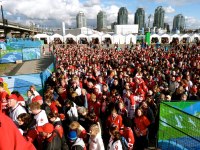 Before the game starts, the media interviews the sister of one of the American hockey players. The sister, her face fully painted with the American flag, says “When our team doesn’t play Canada, it’s just not the same.” This rivalry sets the tone for entire game.
Canada was up 2-0 by the end of the 1st. Goaltending for the Canadians was mindblowing. If it wasn’t for Shannon Szabados it would have been a scarier game. Even with the killer netminding, the game was a nailbiter. Lots of action, even without bodychecking.

Usually when the American women got possession, their fans chanted “U-S-A!” It was fun because Canadian fans would just chant “Ca-Na-Da!” over it. It’s pretty easy to drown out “U-S-A!” in Canada Hockey Place! It was all in good humor.
The most tearful moment for me was after the game was over and won by the Canadians. The American team in general was not happy**at all**with their silver. 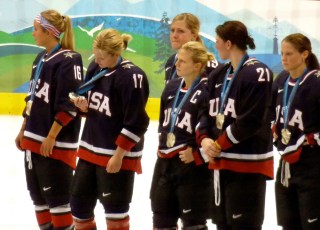 In fact, most of the players could not break a smile when the Silver medal was placed upon their necks. Saving the day, a few fans started to chant, “U-S-A!” Pretty soon the whole stadium was clapping and chanting, “U-S-A, U-S-A!” That was it, I lost it and started to cry. Canadians are the classiest fans in the world.
By the way, the Finns who won Bronze medals were so friggen happy.

Then we got some indoor pyrotechnics. Who doesn’t like that?