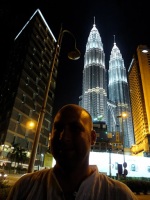 Anyway we’re renting a condo direct from the owner who is a nice guy. The flat is a small one bedroom on the 12th floor in a 40 floor high rise. The building is centrally located. Derek Jeter could hit a fly ball from our bedroom and hit the Petronas Towers. We have a rooftop pool and gym. I got back into my ashtanga practice, the warmth inspires me so much.

What about the beer, you ask? Not much variety. Lots of regional swill. Carlsberg. Tiger. Skol. Varieties thereof. Then there are the stouts. Thank goodness for the stouts. We have two–Malaysian Guinness and Danish Royal. The former has gone downhill, suffers from a diacetyl problem. The latter is good enough to buy by the case, which we do. Comes out to much cheaper that way. Beer in Malaysia is expensive. More expensive than it is almost anywhere I’ve been including Munich. When you go out to a bar and order a Hoegaarden you pay almost $10. Seriously! So we drink mostly at home, and save the outings as treats.

There is one place called Craft Brews, it’s in the suburbs. They’re trying real hard to live up to their name. On tap they have some beers from a Singaporean brewpub. Here are some photos of the beers. That’s our friend Rezufrin with the spirulina beer.

Food here is damn cheap and damn delicious. Malay be one of my favorite cuisines in the world. If you check out my Flickr page, you can see we have a regular hawker stall down the road. I can get 2 meals worth of food for $2 from her. She makes tons of different dishes, too–like 10 different fish dishes each day and half a dozen veggie preparations, and tempeh and stuffed tofu and rendang and you name it, they put it on the buffet and you pay by the item. Unfortunately I think they use some MSG. I feel funny after eating sometimes so I make a point to eat small portions.

That’s it for now, we’ve only had one real storm since we’ve been here. Disappointed–we both like storms. We’ve been working real hard the past few days, burnout is immanent and that means we’ll be taking a break. Maybe Langkawi. Maybe Perhentian.

Oh wait before I forget…across the street they are constructing a building. I like watching it. I am taking pictures periodically to document the progress. This will become my time-lapse project. It will be nice to visually mark the passage of time.