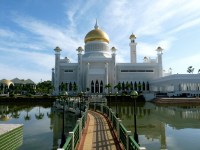 It was like taking a 20 minute flight to the Middle East. We descended into Brunei before we’d even bothered reaching cruising altitude and were greeted with Shell signs in Jawi (Malay written in Arabic script). The skyline of the capital is dominated by mosques and photographs of the sultan are everywhere. Even the town of Bander seri Begawan (BSB) itself seems strangely like Abu Dhabi, with low rise shophouses, more open to the street than the usual Malay style. Oh yes, and in keeping with Sharia law, no alcohol and no pork. Even in the Chinese restaurants. That’s a bit strange, really, but there was something strange about Brunei the whole way through.

Strangeness number one – also coolness number one – is that half the capital city is on stilts in the water. Water villages (kampung ayer) are fairly common in parts of Asia. They are the provenance of the ultra-poor in Cambodia, and of fishers in the Malaysian parts of Borneo. In Brunei, the kampung ayer is fairly well developed. The government has sprayed away all the mosquitoes, pushed the crocodiles out of town and built stilt-mosques, stilt-hospitals, stilt fire house, stilt-schools and even a stilt-jail and cop shop for the residents. Inside the outwardly ramshackle homes are computers, video games, and televisions. The hackeneyed 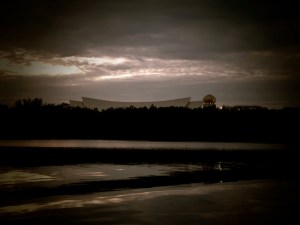 travel cliché “The Venice of….” actually applies here, since you cannot go anywhere without a boat as there are no roads. Definitely cool. A water taxi only costs .50 or $1 to get from point to point but if you want to hire one to take you to down river to the Sultan’s palace (worth a peek) it will cost up to 20 Brunei dollars, about USD15. 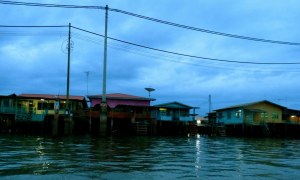 Only people of Malay origin live in the kampung ayer, but downtown you see other groups, including the Chinese who have a temple there. Our first night we stayed at the budgetary Jubilee Hotel, spent a little time in the city, and took a taxi to the Gadong night market. The town component of BSB is small and quiet so it will not be confused for any other Southeast Asian capital. But the markets could not be mistaken for anything other than Southeast Asia. 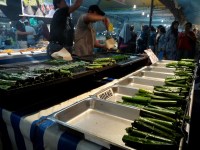 When we went to Singapore, it was interesting to compare it to Malaysia. Basically, Singapore, Malaysia and Brunei are all close cousins, brothers even. They all speak Malay and English; they all have varying degrees of economic success, they all have sizable Chinese populations and they are all tropical rainforest climates. But as with Singapore, we found Brunei very different from Malaysia in vibe and content. At the Gadong night market, there were all sorts of things we hadn’t seen before. One of us was especially smitten by the local red-fleshed durian varietal; the other was down with a big chunk of goat on the bone, fresh of the grill and full of marrow. No need to mention who was who. The day market at Kg. Kianggeh the next morning yielded other unusual delights, including tarap, a member of the jackfruit family that resembles a hairy rubber ball. It’s in season now and and we bought one eagerly after reading about it online. The tarap vendor also gave us some strange nut-looking things that we were told to take back to KK to cook. 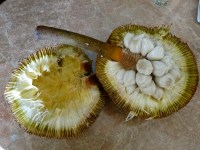 After checking out the town, we checked in to the Empire. This 5-star+ hotel is the opulence you expect from one of the world’s richest countries. With its wealth, Brunei could be Singapore, but it isn’t. Instead, it has a sultan worth $20 billion. Thus, strangeness number two. The Sultan of Brunei, once the richest person in the world, owns 7000 cars according to Wiki. What the hell does he do with all of them? It’s hard to say what is the impressive car statistic after that number, but maybe the 452 Ferraris or the 134 Koenigseggs would be in there. Or the 604 Rolls Royces. And we should probably mention the guy has two 747s, presumably so he isn’t stuck flying in some sort of non-gold-plated bucket while his plane is in the shop. At least we felt good that the airport would be equipped with the latest equipment! 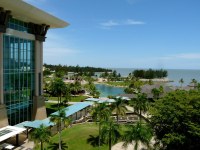 The Empire was built by the sultan’s brother, and sprawls over a vast oceanfront estate. The lobby has gold-plated fixtures and staircases with hundreds of large semi-precious stone inlays. Our massive room (with a bathroom almost the same size as the main room) came with a monstrous deck overlooking the South China Sea. There are pools everywhere, and a full country club as well, including a Nicklaus course. We didn’t golf, but we tried to do as much else as possible. A favorite of the sultan (and indeed many in this part of the world) is squash, so we rented some rackets, invented the rules based on what seemed would be good rules for squash, and played for an hour and a half. Fun game.

Being in the middle of nowhere, we ate at the resort, at its Italian restaurant. The food was ok, even if not authentic. And we had no bottle of wine. They don’t have alcohol in Brunei. Public drinking is banned, selling alcohol is banned. Non-Muslim visitors have an alcohol quota and expats tend to bring theirs in from Malaysia – no doubt from the nearby duty free island of Labuan. Tribespeople probably make their own toddy at home. But here’s the thing. Not knocking Islam here, because if a nation of Muslims wants to impose their alcohol restrictions on its own people, that’s their choice and too bad for the foreigners. But Brunei is only two-thirds Muslim. The Chinese are Buddhist and some tribes are Christian. Plus there’s a lot of foreigners on account of the oil business. It seems to me that if places like Bahrain, the United Arab Emirates and even Pakistan can find ways to accommodate those who would like to drink (and those places are well over 90% Muslim) then so can Brunei. The Empire is a great place, but to lack that bottle of wine with your Italian dinner; or to be unable to enjoy a fine stout while watching the sunset or a cocktail at the pool bar just seems wholly unreasonable. There are non-Muslims to serve, most of the guests we saw were non-Muslim and really bars in Muslim countries get by just fine by taking measures to ensure that Muslims aren’t served. Brunei would benefit from the same – they are out of step with their more tolerant neighbours on this one. There are ways of doing this while being respectful to 1/3 of the population and a large portion of visitors. Having said that, the Empire Hotel would be a great place for a rock star detox.

Ok, rant done and really for us two days with no alcohol wasn’t a big deal. We made do just fine, because the Empire was so amazing. Sunshine had a private beach all to herself one afternoon, which is just unheard of anywhere. The hotel grounds have a full cinema with three different theaters showing new releases; 8 lanes of 10-pin bowling; billiards; badminton; tennis; and several stretches of private beach.

For a country that could have a lot going for it, it just seemed like there were too many little strange quirks, too many niggly things. There is a sense of unease that you can’t really put your finger on, and you don’t feel as relaxed in Brunei as in Malaysia or Singapore. It’s just that little bit more foreign, which made it fun for a couple of days but might become stifling for a longer visit.