Beer of the Year

With twelve months of beer drinking under our belts this year, this was a surprisingly easy decision.

It would be pretty hard to top the experience of drinking the new beer brewed by Schlenkerla, the Eiche (oak) smoked doppelbock. We got to try it three ways: straight from the tanks in the brewery cellars, from the wooden barrels in the tavern, and in bottles. Our near-fanatical commitment to in-situ drinking holds here, as drinking any Schlenkerla brew from the barrels in the tavern is an unforgettable experience.

No, it wasn’t that imperial stout from Brunei (just kidding–alcohol is banned in Brunei). It was a Chinese hefeweizen.

For Josh, the Wuhan Brewing Technical Academy’s hefeweizen was not a surprise because he’d already had it after visiting Wuhan a few years back. He took Sunshine to visit in 2010. The Wuhan Brewing Academy is part of the local technology university. Each year the graduating class learns how to make a classic German hefeweizen, with help from the German-installed equipment and German-trained staff who teach how to brew impeccable, clean beer made on point to style. The finished product is astonishingly tasty, to the point where it is easily better than most native German versions of the style.

Given this was not a surprise to Josh, we’ll both agree that the surprise beer of the year was the gueze blended by a non-commercial German lambic blender. To tell you just how good this gueze was, we opened a bottle of Cantillon lambic Bio afterwards and it paled in comparison. But that’s probably too esoteric to be of any worth to anyone but us.

This is by far the most difficult one to choose, after spending our year in some of the world’s best food nations. Was it the salted egg crab in Kuala Lumpur? The chili pan mee, also in KL? The Nyonya feast in Ipoh? Alley dumplings in Shanghai? Overall, we agree that the Philippine birthday dinner in Kuching, Malaysia on the island of Borneo deserves to win. Our curry was served in a pumpkin.

Serious Barista Coffee of the Year 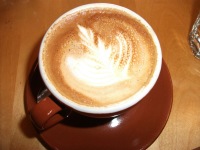 Pub of the Year (Besides Schlenkerla)

They didn’t have the best beer selection and a couple were wonky, but for some reason we kept feeling drawn to return again and again to the Bow Bar during our three week stay in Edinburgh. There is something about the character of that place, not to mention the stellar single malt selection, that makes the Bow Bar a (relatively) easy winner.

Dessert of the Year

Neither of us are dessert lovers to begin with, so we really mean it when we say that England had the only dessert worth talking about: sticky toffee pudding. I don’t know how they make it, but it’s absolutely decadent and delicious–the way a proper dessert should be. One of the best we had was in the English lake district in a town called Torver.

Restaurant of the Year

Is it possible to eat at the same restaurant four days a week for five months straight? You would not think so, but during our busiest time of year Nasi Ayam Lorong Perak fed us fresh and varied array of Malaysian food ranging from curried crab, squid with sambal, tempeh goreng, banana leaf fish and rendang. Easily the best nasi champur in town–and it’s a simple street stall too and we got our meals to go.

Concert of the Year 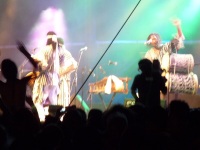 Based on atmosphere alone, the Rainforest World Music Festival wins. Held in the middle of the Borneo jungle, our two full days of concerts came complete with pouring rain and mud pit dancing. Based on music alone, though, seeing Einsturzende Neubauten in Prague takes the cake.

Islay Malt of the Year

All of them. If we had to choose, we’ll take the Laphroaig 30-year old.

Pork Sandwich of the Year

After waiting in line for the famous pork sandwich in Macau in 2009, and touring the American South earlier that year, we are well on the way to creating a global top ten list of pork sandwiches. Oink in Edinburgh wins this year, with their fabulous take on pulled pork. The hax’n semmel at Oktoberfest is in second place.

Beer Festival of the Year

We went to some goodies: Strange Brew near Seattle; the Singapore Asia Beer Fest. By far the most characterful–and probably the one with the rarest beers and ciders–was the CAMRA-sponsored Swansea Bay beer festival in Wales. 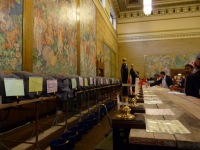 Beer Culture of the Year 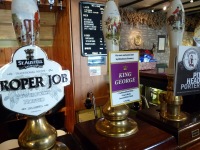 Somerset, with its commitment to real ale, real character pubs, slow food, and traditional cider, was one of the real joys of 2010.