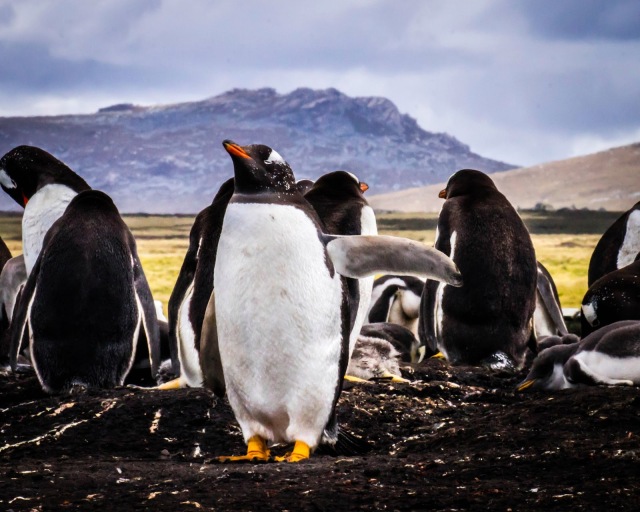 As a kid growing up in the 80s, I hadn’t associated the Falkland Islands with anything other than the war between the British and the Argentinians. But there is so much more to the Falkland Islands than this conflict. Although the politics provide an integral context to any visit, it is really the scenery, the wildlife, and the way of life of the people that live here that make the Falklands special.

To visit the Falklands even now, it appears the conflict has ended in a fragile stalemate. The territory is still in an ongoing dispute. Our ship captain lied to the Argentinian officials in Buenos Aires, asserting that the Falklands were not an officially scheduled stop on our itinerary. He probably called them as the Argentinians prefer, Las Malvinas.

In fact, the Falklands were not a scheduled stop when we booked the cruise. It was a pure surprise that we went at all. The day after the ship pulled away from Buenos Aires, we found a memo under our door saying something about the weather permitting us to dock in Port Stanley and would we like to see some penguins?

I developed a bit of a penguin fetish after meeting my first little waddlers down in South Africa. I crave seeing them now. But before we get to the penguins, I see lots of Union Jacks and this sticker a few times.

Most of the residents on the Falklands are of British descent and have been living there for generations. They work the unforgiving, infertile land by raising sheep and cattle. Falklanders are among the most self-sufficient people I have ever encountered, and cultivate barely any connection to the outside world. If you want to be off the grid, you can do a lot worse.

But you have to like small-town living. Everyone knows everyone else’s business, and they’ll know yours, too, by the time you leave. I learned a few things myself. Such as, the day after our arrival was the annual sheep-shearing contest, which is a really big deal.

There is barely any tourism on the islands, which are a fairly large archipelago of windswept, boggy, treeless terrain reminiscent of Scotland. I fell in love instantly, even before we anchored.

The weather is harsh. It was summertime, but it alternated between cold and rainy, and just cold. Luckily we had no real wind that day. Occasionally the clouds cleared, giving us the most amazing polarized light.

Visitors ambitious enough to travel to the Falklands are generally there to see some wildlife, the best of which is the many different types of penguins that breed at different spots around the island.

The nerve of the penguins! Almost all of the breeding grounds are on private land. The owners of the farm therefore double as tour guides and drive their personal 4x4s across the mud to see the penguins. The jeep rides are long and for some, grueling. It’s all off-road. You get stuck in the mud. It’s like getting two trips in one–an ATV adventure plus an encounter with one of nature’s most special species.

On the Falkland Islands, I went to two different penguin breeding grounds. The first one was on a pretty little beach called Bluff Cove, which is a temporary home to several different types of penguin, including the Gentoo. He’s the guy in the foreground with the orange beak.

There were mostly Gentoo at Bluff Cove, but also some Magellanic penguin and about 8 of the majestic King penguins, which are more exotic than the rest. In the above photo, the kings are the elegant fellows in the background with the yellow trim.

Penguins spend most of their time at sea, and are only on land when they are breeding or molting. Males and females share the childcare duties. One spouse takes care of the chicks, while the other is swimming for food.

Parents eat at sea, and then regurgitate their meal to feed the young…And you thought your mom was a good cook.

Bluff Cove was not enough. So I went on a second penguin adventure. This one was much more difficult to get to, but was worth it because the reward is a rare type of penguin that does not like to breed near other types of penguin. These Rockhopper penguins are really neat looking. 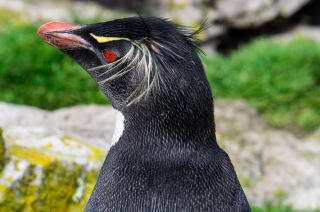 They are distinguished by that yellow tuft of ear feather.

Plus, the rockhopper beach was really rugged and nice to look at. 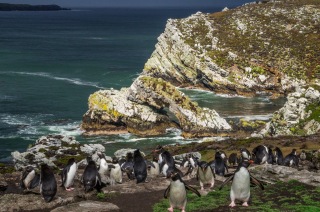 The breeding ground was located on the ten thousand acres that was owned by a small family. The family house and barn was extremely rustic, and I can only imagine what it was like on the inside after seeing their corrugated tin roofs and their lack of modern amenities. But the Falklands is an expensive place to live–apparently the cheapest small dwelling is £250,000. It seems like a tough life, and that the people work extremely hard. 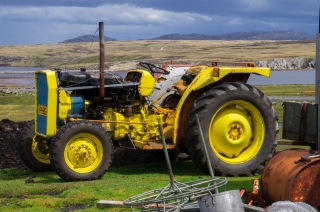 Land might be pricy but in true British fashion, the prices of beer in the local pubs is kept cheap, around £3 a pint for English microbrew. This is in keeping with the notion that beer is food for the British and to most Falklanders, the islands are a part of the United Kingdom. To suggest anything else is a call to arms!

And to be in one of the Falklands pubs (sorry, the camera did not come out during my drinking session), one could easily be forgiven for forgetting that we are not on the British Isles in some tiny provincial hamlet. All the heads in the room turn, their eyes scrutinizing the strangers when we walk in. They’re all friendly though. Once the ice is broken, conversations flow as everyone is as curious about us as we are of them. We met an oil rig worker, and soon gathered that offshore drilling is a likely undercurrent of the ongoing conflict over the territories–something the media has suspiciously failed to expose.

Unfortunately, the local brewer did not have any of his beer ready for consumption. His strong brews are supposed to be good, according to one of my drivers. This brewer apparently was set to exhibit at the sheep-shearing festival we were missing out on.

So I think this fact warrants a return visit. I certainly want to go back. The Falkland Islands were one of the highlights of our whole cruise, for me second only to Antarctica.