The Tuscan hills are shrouded in clouds this morning, and the forecasters say the rain will last. I will take it as a sign to cool off. I bought the Firenze Card, a perhaps overpriced (€72) but fun pass that offers the visitor a sort of VIP status when visiting such Florentine marvels as Michelangelo’s David. It was worth every Euro to walk through the turnstile ahead of a hundred other people who may be on line for an hour or more. Plus, having the card encouraged me to visit many more exhibits than I would have otherwise, making my journey more memorable.

The card expires a stingy 72 hours after first use (don’t you just love their €72 for 72 hours marketing gimmick?), making my art history tour of Florence a race against time and a test of personal stamina.

From the Palazzo Pitti to Palazzo Vecchio, from Santa Maria Novella to Santa Croce, I ticked off all of Florence’s A-list and much of its B-list too. I feel big, strong, and empowered. And I felt a little sorry for Josh.

Josh visited nothing. He didn’t even climb the bell tower.

This man has moped his way through more museums than I can count. I will excitedly run up to him with a revelation I had about a painting or sculpture, only to find him seated on a bench playing video games on his phone with the, “Can we go yet?” look on his face. His insufferable ennui came to head when we approached Florence and he admitted that he did not care about Michelangelo’s or Donatello’s Davids, or anything else born and made in Florence. He just wanted to go to the market, stay in the apartment, and cook for me.

Cook for me? When he put it that way, I gladly left him at home to make Sri Lankan curry while I stared at “The Birth of Venus” and about seven different Annunciation of Mary scenes. I took Florence by its pigtails. Better put, I took it by its balls–there are many man parts rendered in bronze and marble in the city of eternal spring. 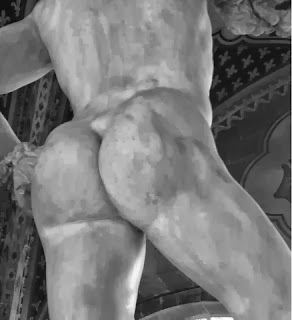 I flew around the city at a pace that would have left many people hospitalized. After paying for the Firenze Card, I had a strong sense of motivation to get my money’s worth. I did, because I can handle the fast pace. Just like the racing cyclists, whose tournament was messing with the city.

There is no need to tell you all I saw, because that would be like telling you I saw the Eiffel Tower in Paris. 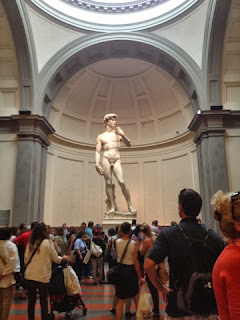 From Josh’s perspective, Florence was fine without museums, churches, and sculpture gardens. As a living, working city, Florence is as pleasant as it gets. Produce shops, salumerias, standout boutiques with fresh fashions being made in front of your eyes, artisan jewelry and sundry wares dot the streets of Florence. There are more hipsters with better clothes and better ink in Florence than in Milan. And great beer.

There are mainstream fashion districts too: the high-end window shopping rivals Milan’s but there is the H&M set too for pedestrian threads. Florence is actually livable. Which is the way Josh wanted to experience it: as a resident would, having to go about the tasks of daily life including having a beer at the end of the day.

We were warned by Italians that Florence was not a “real” city, not a genuinely “Italian” city, and that it was a city “only for tourists.” But that is like saying Miami Beach is “only for tourists.” Even the most touristy cities in the world have real residents with real needs.

Temporary residents have needs, too. Like beer. We had a list of potential beer joints, and ended up going back to the same one again and again. It was around the corner from us, but it also happened to be the best in town. It’s called Archea, and they are a microbrewery with a small friendly pub pleasantly appointed for locals. We even got a loyalty card, and filled it up with enough stamps to get two free beers on our last night.

So the answer is yes. One most certainly can hate art and still enjoy Florence.

I asked Josh to respond to my post and he did.

He Said:
Firenze is probably best known as an art town.  It rose to prominence as the home of the Medici family, and they were patrons of the arts, sponsoring a whole host of famous artists like..yeah.  If you’re already yawning, you’re not alone.  But never fear, because Florence has a lot of other things going for it.  Don’t be a sheep.  Don’t stand in line at the Uffizi gallery because somebody else told you this was important.  If you’re into art, go for it.  But if you’re not, don’t stand there just because you don’t know what else to do with yourself.  Feel free to seek out the other rewards of Florence, for there are many.  So if you’d rather eat a plate of steamed clams than look at the Birth of Venus, and reckon if you wanted to see a naked dude you’d look in the mirror (or at your husband/boyfriend), this is the Florence guide for you.

Tip #1 – See the place.  That’s right.  Florence is beautiful.  It was one of the richest cities in the world at one point, which means it is gifted with incredible architecture.  The narrow walkways of the old town are easy places in which to get lost.   The churches and palaces are magical and you can easily spend half a day just walking around with your neck cranked upward staring at the city.  For other views, you can go up high and get an overview that will include the hills surrounding the city.  There’s the Vecchio Tower, the Duomo cupola, the Duomo bell tower and the popular Piazzo Michaelangelio on the far side of the river, so you’re not going to be spoiled for choice of stunning vistas.

Tip #2 – Eat something.  The central market gets its share of tourists, but it is full value.  A lot of locals shop here, and this means there’s a lot of delicious everyday food.  If you’re smart, you’ll have rented an apartment and will be doing your own cooking.  Look for the seasonal produce – on my visit it was porcini mushrooms.  There’s always seafood, cheese and deli meats…lots of them.  You can try the local tripe stew, ogle skinned rabbits and pig’s heads.  This is real stuff, and you’ll probably see Americans getting grossed out at some of the stalls.   And because Florence is a normal, living city, you’ll find things you weren’t expecting to find, like the Peruvian vendors with their choclo and aji pancas.  Across the street there’s a Sri Lankan shop – get some Maldive fish sambol and a big bottle of Lion Stout to break up the Italian food for a night.  While you’re there, get a shot of espresso or a personal-sized wine bottle and relax a little.  It’s hard work planning out delicious meals.

Tip #3 – Goooooooooooooooooooooooooool!  One sure way to meet the locals is to head out on a night when the local football club, Fiorentina, is playing.  Florence is still an important city and their team plays at the highest level, Serie A.  Locals take this stuff seriously. They’re trained from birth to cheer for Fiorentina and to have a near-violent hatred of nearby rivals. You’ll see the Florentines huddled around the television in every bar, restaurant and corner store while the game is on.  Join them, and feel like you’re not just a tourist for a couple of hours.  Just don’t cheer for the other team!  If you want a good beer while you’re doing this, watch the game at the Archea Brewery.

Tip #4 – Watch the people.  Florence is full of interesting stories, or at least interesting people about whom you can invent stories.  The locals are often drawn to and influenced by the art, and therefore love high end design.  Clothes, hairstyles, furniture, home decorations, all of these things are beautiful here.  The people are just interesting to look at, much more so than in a workaday place like Milan.  Then there’s the Africans.  These guys have such a crazy journey to get here, coming up from places like Senegal across the desert and the Mediterranean.  It’s a harrowing journey for the chance at a better life, and without paperwork many end up hawking things. You probably won’t need anything they sell unless you’re caught out in the rain without an umbrella (they’ll sell you one at a good price), but it’s fun to watch how they have a completely different way of life and social structure to the Italians.  And then, if you really must, watch the tourists.  You get a lot of different types – students, art lovers, random cruise ship types, and they come from all over the world.

Tip #5 – Get out of Florence.  The city isn’t situated in a barren wasteland, it’s in Tuscany.  So get out and see this famously beautiful province.  You can take a lot of day trips, to places like Pisa, Lucca and Siena, all of which are gorgeous and with enough interesting things that you could spend a night in any of them.  Better yet, rent a car and really see the Tuscan countryside.  There’s small towns like San Gimignano that are hard to get to on public transport; there’s wineries and of course the UNESCO-recognized, world-famous Tuscan villas.  Every town has its own culture and cuisine, and getting to understand each will only add to your Italy traveler street cred.