Today was divided into three parts:

First, the scenery unfolds continuously like a NatGeo film reel. Fernie area is especially fetching because the town sits in a tight basin surrounded by mountains. On one side of you are precipitous bald rock faces that slope at impossible angles, on another side are some monolithic buttes, and behind you runs a steep tree-covered rocky ridge. Fernie can make you dizzy. 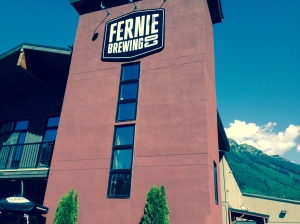 We stopped briefly at the Fernie Brewing company, which allowed us to stabilize after the scenery-inducing swoon. Fernie beers have never stood out to me before, but their new pils is tasting fresh, and so we filled a small growler to take with us. I also appreciated the pale ale and IPA because they are made with pale malts, and the hopping is more dry and bitter than it is fruity and estery. This is a refreshing change of pace from the sweet, chewy IPAs that have flooded the market.

Armed with beer, we continue along Highway 3, also known as the Crowsnest Highway. This is the highway we’ve been on since Day One. Crowsnest Highway named for the region at the pass, which has now degenerated into really stupefying scenery that makes you want to pitch a teepee and never take it down.

We stopped for a picnic in a small park and later noticed that the Crowsnest Pass area has an island in a river with a campground and picnic tables surrounded by the Rocky cliffs. So if you’re headed this way looking for a rest stop, you can’t do much better than that one.

By the time we traversed the Crowsnest Pass area, we had shifted into a third radically different geographic zone in just three days. The day before, we had traveled from the Okanagan to the Rockies; and today, we traveled from the Rocky Mountains to the wild west plains. Now we’re in Blackfoot territory. The plains are studded with wind turbines. The telltale vivid yellow of canola covers the ground. And you keep company with cows, ranches, and pickup trucks. 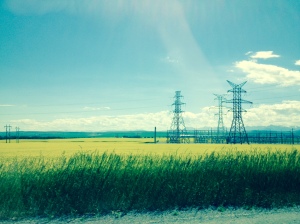 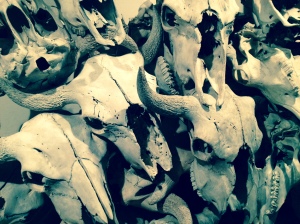 A brief background: buffalo jumps are places, usually located on escarpments, where Plains Indians lured herds of buffalo to their death. Head Smashed-In Buffalo Jump is named after a young brave who was killed in this process. So the name instantly invokes respect for the power of nature and the cycle of life. Get in the way of a buffalo stampede and your head gets smashed in. Simple. 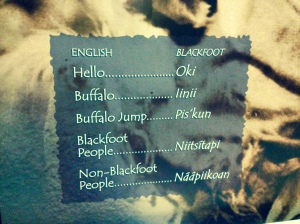 The interpretive center was amazing; better than expected. We learned that people have been living in the area for 9000 years, and for 6000 years they were practicing this buffalo hunting technique each autumn when the buffalo herds, and their individual members, are fat.

We also learned that the Plains Indians (such as the Blackfoot) were able to practice this strategic method of hunting for six thousand years because they understood sustainability and respect for nature, which in turn helped them to survive a harsh environment. 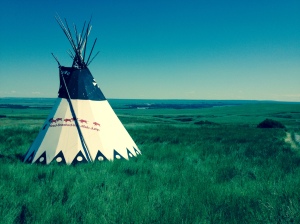 After the 18th century, it all went downhill. First, the white men brought horses. The Plains Indians stopped having a strong relationship with the buffalo. Then, the white people started to hunt buffalo in idiotic ways like the Buffalo Bill-style joyrides in which throngs of rednecks would shoot buffalo from moving trains for sport and leave the carcasses to rot. Finally, whereas the Indians used everything–everything–the white people sometimes skinned the hide to sell it but never used the rest of the giant magical beast. The Indians ate the organs and bone marrow, ground up random meat into pemmican, boiled the sinew off the meat for broth, used the bones for tools, and so on. All this is ancient history, which is why you’re watching a movie about it at a museum. It feels just like any other archaeological site: something happened to stir things up and a once-mighty civilization has its Ozymandias moment.

The museum itself is five stories high, and there is a small walk you can do to soak up a sense of place, time, culture, and connection. You need a solid two hours to visit Head Smashed-In Buffalo Jump.

Our final destination was Fort MacLeod, which I thought would just be a piddly town. It is piddly and po-dunk, but with a twist: it’s also got some great old architecture and a sense of local pride. There are still lots of First Nations (Blackfoot tribes of course) here. 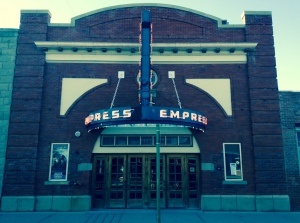 The main street has been spruced up to a degree that makes it welcoming, and there are plenty of interpretive signs telling you about the history of each building and of the town itself. The namesake Fort MacLeod is actually wooden fort and has four turrets.

Why a fort in the middle of nowhere? The law was needed to pacify all the outlaws that lived in these parts, messin’ with the local injuns and all that. The North-West Mounted Police later became The Royal Canadian Mounted Police (the Mounties). Colonel James MacLeod did such a good job of keeping the troublemakers at bay that the town was named after him. Apparently, even the Blackfoot liked Colonel MacLeod because he did a good job protecting the area and preventing the proliferation of alcohol. 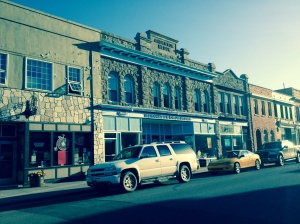 Joni Mitchell is one of a few famous people born here. The city was once as important as Calgary was, but got down on its luck and passed over by Lethbridge. It’s a shame, as the town is quite attractive and it’s the only good base to visit Head Smashed-In Buffalo Jump. But there are unfortunately few businesses here, except for hotels, and many people visit Head Smashed-In as a day trip from Calgary.  We stayed at the DJ Motel, which is a good value roadside motel. 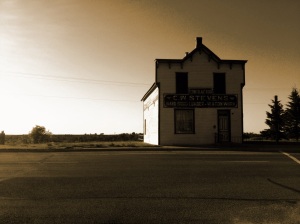 Tomorrow we head to another UNESCO World Heritage site: Dinosaur Provincial Park. Not archaeology. Paleontology. Taking it way back.