Since the likes of Anthony Bourdain pimped Mexico’s fourth-largest city, Puebla has been on the hit list of many a foodie. Puebla’s namesake dish, mole poblano, is its most famous, but we encountered many layers to the food scene in just 3 days and nights in this charming, wealthy city.

Eating was a primary purpose of our trip to Puebla, but it was fairly difficult to find decent street food. In fact, there are few street vendors at all in this rather posh part of Mexico. There is also a dearth of restaurants, in a city of this size. 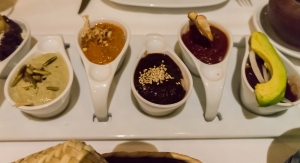 A few days later, we discovered Antojitos Tomy, which had some of the better “street food” style eats but with plenty of tables and chairs. If you go, try a molote, a scrumptious and perfectly fried snack that is like a combination between an enchilada and an empanada. The blue corn enchiladas, made right before your eyes, are also a true treat. 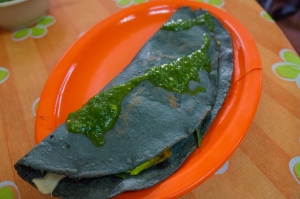 For craft beer, we got incredibly lucky. We started an evening at the cool Utopia Belgian Beer Bistro, in the center of the old town. Then we took a taxi closer to our hotel, to a Mexican craft beer mecca called Draft Gastropub. Because of its suburban location, we expected a soulless corporate venue, but what we found was a dedicated beer bar with knowledgeable and enthusiastic staff. Even their food was solid, cooked fresh to order in an open kitchen, and their emphasis on Mexican microbrews surpassed any we had in DF!

Coming from the capital, DF, Puebla seemed small, compact, and accessible. Like Mexico City too, Puebla is monied and it shows in its dedication to the arts and culture. Come to Puebla for the food, and you will invariably be impressed even more by the culture. 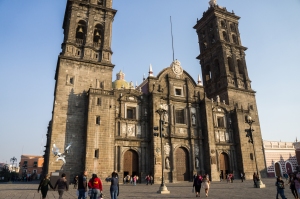 Puebla’s UNESCO old town echoes Old Spain. Even more special is Puebla’s commitment to keeping art fresh. This is not a town resting on its colonial architecture alone. We found several unique and thought-provoking exhibitions housed in colonial buildings, fusing old and new in tempting ways. 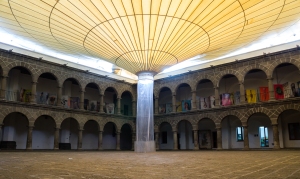 A highlight of Puebla is a visit to the Museo Amparo, which has a gigantic rooftop terrace offering unparalleled views of the UNESCO town center. 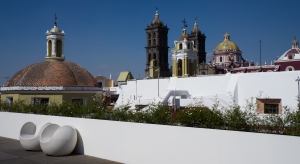 Puebla’s architecture reveals itself to you in fits and spurts. Walking down the street, you will peek into courtyards of old palaces, now government or business offices, and espy a magnificent array of architectural styles. The most notable design elements are those reminiscent of Moorish Spain, like the door frames in this bank building. Its stained glass ceiling renders the Mexican national flag. There were a few art deco gems here and there, too. 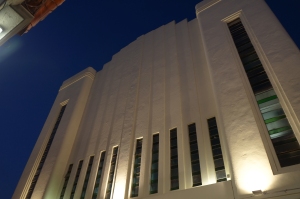 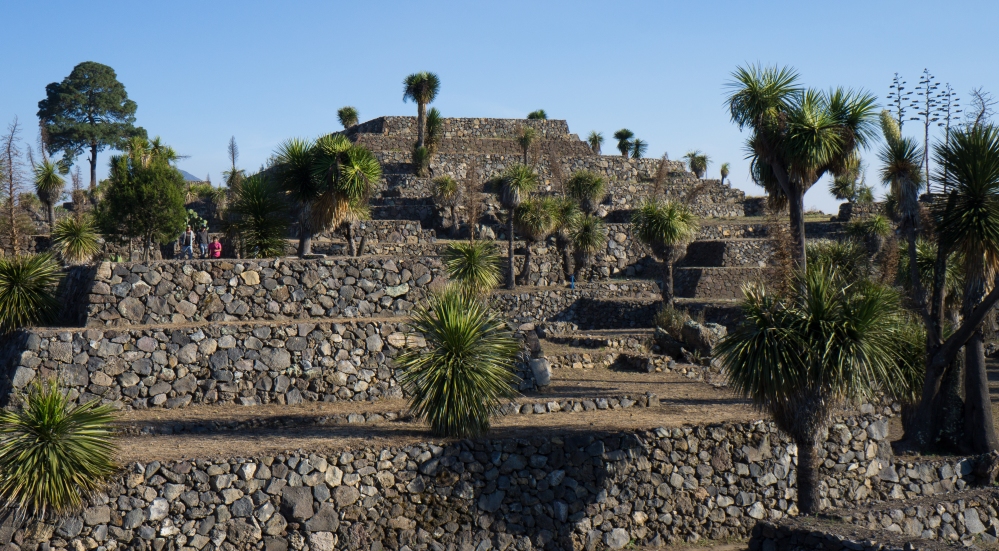 If you have the time, Puebla offers diverse day trips, many of which invite you to explore the rich ancient civilizations of the region. We took the long ride to Xalapa, in neighboring Veracruz, to view one of the nation’s best collections of archaeology at the Museo de Anthropologia. 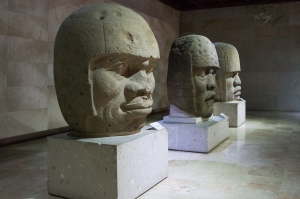 Después, we headed back into Puebla to the ancient site of Cantona, set in extraordinary nature. On our way into town, we had visited the more famous and easier to reach (but less spectacular) site of the Cholula pyramid, which is one of the world’s largest. Also close by are several colonial era ex-monasteries where devout Spanish Catholics took vows of poverty, converted the natives, and worshipped Jesus in a pink skirt. 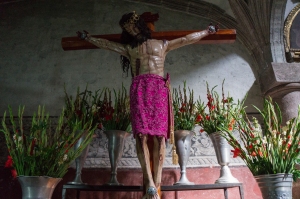 A large number of the former convents or monasteries are also UNESCO sites, like Huejotzingo. The snow-covered mountains in the background can be a surprise to the eyes as they seem to loom out of nowhere.

Back to Puebla, you can visit a daily antiques and bric-a-brac market filled with laid-back energy and fun vibes. 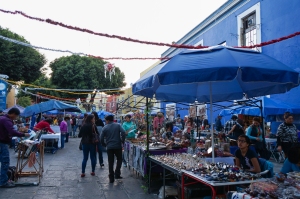 There are also a few unique pit stops to make in the old town: La Pasita (“little raisin”), and Legendaria Fábrica de Puros. La Pasita is a delightful turn-of-the-century kitsch bar serving hand-made liquor like their flagship Pasita, a raisin liquor that is remarkably not too sweet. We had three rounds (6 different samples), and each was good. Legendaria is a cigar maker, hand-rolling before your eyes delightful smokes you can take with you en route to mezcal country (that was our idea, anyway). 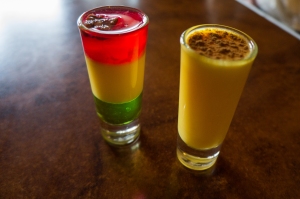 On our last day, we walked to the mural art project. It has been neglected over the past few years, but represents the youthful, vibrant, progressive spirit of this town. Puebla is a large city that feels like a small town, which can be a delightful pairing. 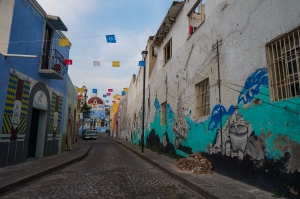