Cappadocia is the kind of place people dream about. One look at the photos and you’re hooked.

A few travelers we met planned their Cappadocia trip years in advance, and Josh and I were lucky enough to spend 8 nights in this fascinating region.

People come not just the undulating and phallic rock formations, but also to see that people have lived in these rocks for almost a thousand years. The Christians carved hundreds of churches into caves, painting elaborate murals inside. 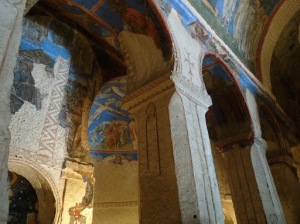 Cappadocia also has two hundred labyrinthine multi-level underground cities, 36 of which are open to the public. As if the landscape and history isn’t enough to keep it interesting, the way modern life has been hewn into the bowels of the earth will.

Imagine living in a cave with WiFi. That’s what we did but because we didn’t plan our trip years in advance, we found ourselves in the uncomfortable position of moving from cave room to cave room every night but one. This experience made what should have been a relaxing trip a hectic one, so here’s some advice: book a room in advance if you plan on staying more than a few nights here. And stick to your plan!

Living inside a cave is interesting.

They’re dark and evocative, annoying at times but always seductive. The quality of Göreme’s cave rooms varies from hotel to hotel. Some are swank, some are dank. The Traveller’s Hotel is a new mid-range boutique variety, with luxurious bedding and pro blow dryers in the bathrooms. Most rooms have small fireplaces. All have heaters. At least one room has a Jacuzzi bathtub but it’s too small for two people. Most important for us is the in-room WiFi, which is not standard even at the best of cave hotels. 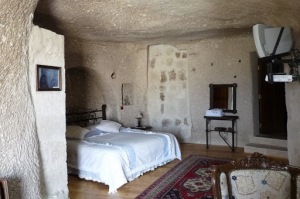 Be warned, even nice caves may be bad for people with allergies. I don’t but still coughed a lot and didn’t have the greatest sleeps, even though none of our rooms at this hotel were mildewy. On the first night of our stay, we slummed it in a dingy cave room filled with stink. It wasn’t heated as advertised and it was cold at night. This was at the Yellow Roses/Panoramic Pension. Josh blogged about that a bit last time, and I reviewed it on Trip Advisor. Needless to say, we moved after one night.

A word about balloon rides. It’s one of the biggest tourist attractions (I didn’t say trap!) in Cappadocia. I won’t go so far as to say they are overpriced because I have no idea what it costs to operate a balloon company. I’m sure the memory lasts a lifetime but ballooning is not “essential” to the Cappadocia experience any more than an airboat ride is “essential” for a visit to the Everglades. The balloon rides that start in the Göreme area stick to the Göreme area, which you can see from a vantage point almost as high as the balloon: the Uchisar fortress. Uchisar was a highlight of Cappadocia because the town is so dramatic, and so civilized. The scenery from the top of the hill is unbeatable.

You can walk there in less than an hour from Göreme thorugh a lovely valley. I do want to ride in a balloon some day but for whatever reason, neither Josh nor I were keen to do it here.

There is nothing to do at night in Cappadocia and it gets a bit boring around here! After dinner, we just wind down with some wine or beer and call it a day. There is a local wine making tradition. From what we tasted they are not celebratory wines but I’m sure at the high end you might find some good ones—we didn’t bother trying. What we really liked was the spiced, mulled wine some bars make. It puts plonk to good use, and is SO nourishing on these cold nights. Highly recommended.

There are a few very good restaurants in Göreme. None are outrageously expensive. The best might be Dibek. As far as I can tell, Dibek is the only restaurant in town that makes you order the pottery kebap at least five hours in advance. A pottery kebap is not a skewer like a shish kebap. It’s more like a stew but the ingredients are put in an earthenware pot and cooked over open flame. 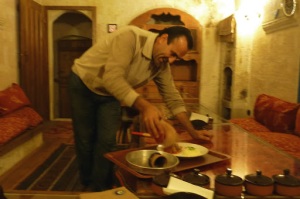 We ordered the vegetarian one (believe it or not it was Josh’s suggestion to do so). It was—how can I best describe it? Gustagasmic? Music for the mouth? Hours on an open flame impart intense smoky flavors. The eggplant tasted charred, just from being inside the clay pot. It might have been the first time Josh ate eggplant and enjoyed it. Oh what I would have done for a rauchbier!

Also on the menu was a crazy white bean dish slow cooked with sun-dried lamb. Sorry folks, there is no substitute for that flavor. We rarely order desserts but you’re damn right we did here after they nailed every dish. In fact, we ordered two desserts. I chose one that is a local specialty called aside (pronounced Ah-SEED-Eh) that is deceptively simple and made with flour, butter/oil, and pekmez (grape molasses). I was expecting something oozy but this was like nothing I have had before. Dense little doughy, fudgy things and served warm. Josh went for the baklava, and if I was writhing on the floor from the pottery kebap, I was close to comatose now. I think I blacked out from the rich buttery pistachio sweetness that was served hot. OH WOW.

After all this pleasure, it’s time to leave Turkey. We’ve been here since the end of August. What’s that, now, 7 weeks? More later. I am pulsing with excitement for the next leg of our journey: Malaysia via Abu Dhabi. I know exactly what you’re thinking: Three 2nd world Muslim countries in two days!