The saying “Know Thyself” is etched on a lintel at the Greek Temple of Apollo at Delphi. You can still read, “γνῶθι σεαυτόν” while marvelling at the evolutionary leap in consciousness such self-awareness represented.

We have become complacent. We think we know ourselves and assume so while affirming our existence with material belongings, shoes and clothes and hobbies that represent who we really are. Yet knowing thyself takes quite a lot of time and trouble. It requires what is best known as Wisdom.

Many years ago I heard about Kuala Lumpur like most people do: because the Petronas twin towers were the then-tallest buildings in the world.

They’re not anymore, but I heard other descriptions of the city that gripped me and placed KL close to the top of my list of Cities I Want to Visit.

Those descriptions include, “It’s a multicultural mecca.” “A food haven!” “A grittier version of Singapore.”

I wouldn’t know because I’ve never been to Singapore. But what I’ve heard about KL comprises a vision of a City I Like.

Incidentally, Unplanned, Serendipitously, we are here. And I love, I absolutely love, Kuala Lumpur.

I want to visit Singapore too. Who doesn’t? But KL was higher on my list than its glossier counterpart. Why? Maybe it’s the contrarian in me. How many times can you hear ‘Why go to KL? Singapore is better!’ before you want to visit KL instead? Maybe it’s my rudimentary knowledge of Bahasa Indonesia, which is somewhat similar to Bahasa Malaysia, which in turn makes me feel happy to form simple sentences like “I like food,” and “I want to eat THAT!” 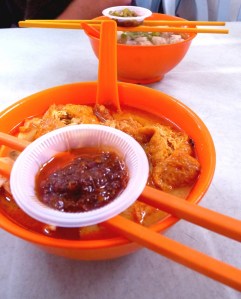 Partly too it’s because I have happy memories of Penang, a chilled-out town in northern Malaysia.

The underlying reason is simple: I know myself. I know what I like. I know what I don’t like. I like taro ice cream, durian, food stalls every block, a melange of cultures, vibrant smiles, and vivid colors. I like the tropics. And KL is an extraordinarily pleasant place both to walk and to take public transport. I can’t say I’ve found anything I don’t like yet. 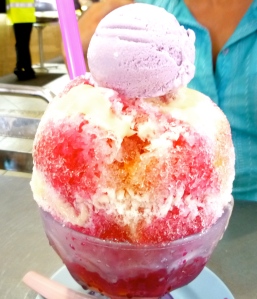 In our first 24 hours alone we ate Indian, Chinese, and Malay meals. Including a stop for ice kacang and Josh’s extra bowl of noodle soup–we spent $14.

To my beer-loving friends, I’m ungespundetes in Malaysia. KL is about as underrated, as tasty, as colorful, and as fun as an unfiltered, unadulterated ungespundetes Franconian lager. I know I’ll get another great beer again, and when in a city as great as this one I can wait a lot easier. The two tasty domestic stouts smooth things out considerably!