It’s funny how we happened to fly directly from one torn-up city to another. Shanghai is an utter mess with new subway lines being built and the entire Bund as well as other major roads torn up for this May’s Expo. Now we’re in Vancouver and it’s the same situation here as the city gets ready for the Olympics next month. Well almost, Vancouver looks pretty darn hot in its preparations for the Olympics and many of the new buildings built will become permanent fixtures on the skyline! Meanwhile, here’s what Shanghai’s signature heritage street, The Bund, looks like now: 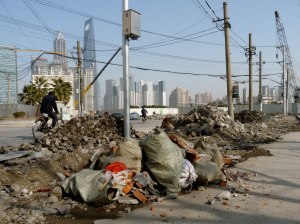 These two cities are metaphors for our personal lives. It might look messy now, especially as we crash with Josh’s brother in his small Vancouver apartment, living out of our suitcases with the same few articles of clothing we’ve worn all year. But all this tearing apart and rebuilding signals growth, change, and an investment in our future. Josh and I aren’t traveling aimlessly, just like Shanghai and Vancouver didn’t wreck their cities without reason. We’ve got living to do and lots of money to earn, which will ultimately culminate in superlative creative projects that could never get completed if we were willing to stick to predictable routines. 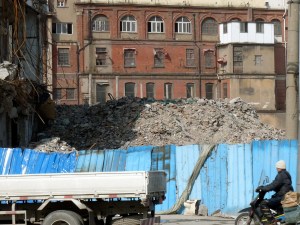 In the meantime, we’re tearing it up by living it up. First meal after landing was sushi and then Gabe made an apple pie. Nice! We have tickets to tonight’s Canucks game and tickets also to 3 Olympic events. Life is good, in spite of the mess. Go Canada Go! 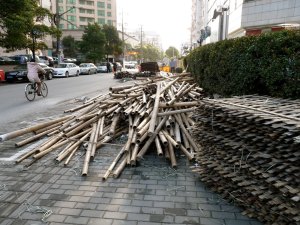 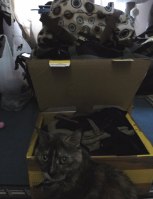