We just got back from a 4d/3n road trip–our first ever in Malaysia. Renting a car was easy and about the same price as in Europe, but a little more than in North America. The total price including the rental of a GPS came to about $45–50 per day. We got a local car called a Proton. Petrol prices are cheap, though because it’s subsidized by the government. The price per liter was about USD.60 so in gallons, about US$2.25. Roads are in very good condition. As for the driving experience, it is very smooth. I have heard that foreigners complain about the driving but I can’t at all understand why as it’s totally civilized and people follow the rules. This is not a typical Asian driving experience but rather more like a European one. It’s not at all as bad as driving in Miami.

Our first stop was the Cameron Highlands, a hill station of tea plantations established by British in the colonial days.

We stayed for 2 nights at a place called Father’s Guesthouse. I described Father’s Guesthouse as being like a resort for backpackers because it has gorgeous grounds worthy of a resort but “backpacker” style digs and prices. The rooms themselves are not so nice, but the grounds made up for that. Having said that I did not sleep well there and might stay somewhere else next time.

In many ways we had a typical Cameronian experience, visiting tea plantations and honeybee farms, and walking in the woods.

Having a car for total freedom and independence was wonderful. Otherwise you have to take a tour to see all these things and you just get carted around on someone else’s schedule. We also would not have found a new 9% Belgian stout called Roberts that happened to be at the apiary we visited. Josh spotted some other international swills too: 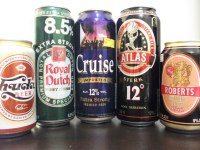 The restaurants in Cameron Highlands are nothing special, at least by Malaysian standards. Oh btw I had a very good reflexology by a skilled lady who treats more locals than foreigners.

We decided to spend a night in Ipoh on our way back to KL. We took a detour to see Taiping, which has a lovely lakeside garden. There is a mangrove near there but we did not have enough time to visit but we still saw some birds and lizards.

Ipoh is a pretty big city with a strong reputation as a food destination. Foreigners often give Ipoh a miss but it gets a decent amount of domestic tourism. The Old Town is quite nice visually, with historic Chinese two-story shop fronts from the 1910s-30s.
Although many of the buildings are dilapidated or abandoned, most are used for modern day businesses including Ipoh’s stunning array of restaurants. We stayed at a decent 3* business hotel called Regalodge a ten-min walk from Old Town.

Ipoh food is well-blogged about. We had several options of where to eat two dinners and one breakfast in our one-night stay. The doorman at the hotel volunteered recommendations for local dishes and where to get them. Then he matter-of-factly said, “What are you going to eat after that? Do you like noodles?” He certainly intuited that we wanted to eat our way through town. His advice and enthusiasm gave us some good food mojo that lasted until the following day.

We opted to try some of the local specialties that we would never try otherwise such as bean sprout chicken. Sounds quite mundane but like so many Chinese it’s hard to understand how so much flavor can be coaxed out of something so simple. That is the beauty of Chinese food and why it’s one of the best food cultures in the world. Ipoh is majority Chinese, and therefore looks and feels quite different from other Malaysian cities which have more like 30 or 40 percent Chinese.

This also meant that Ipoh had a slightly more liberal bar culture. We found a chill spot to have a beer at, the type of place we wish existed in KL

After our appetizer meal digested we hunted for the next course. We got shut out (temporarily) of another local speciality called “salt chicken” but it’s for the best since it’s only sold to go. We ended up taking one home the next morning to steam up in our KL apartment. We had some local hor fun noodles with grilled baby octopus on the side. 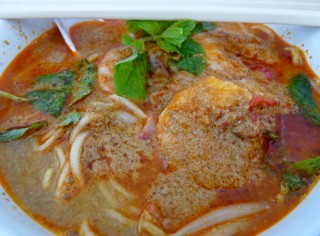 In the morning around 11AM we had curry mee (noodles with rich coconut based curry sauce) which is only served early in the day. We also tried the famous Ipoh “white coffee.” I was suspicious of it but white coffee is not really white, it’s just incredibly rich. 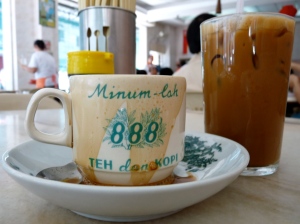 On the drive back to KL we tried to stop at a big nature reserve for a picnic but it was starting to rain so we headed back and drove in rush hour through the storm. It was quite annoying but so similar to Miami I couldn’t believe it–the drivers who recklessly charge through as if the weather does not affect the road conditions, the giant puddles, the gridlock in the suburbs. All that during what turned out to be a lovely purple sunset during a round of overpriced beers made me feel quite at home.

Oh I almost forgot, we stopped to visit a strange place called Kellie’s Castle, an unfinished mansion built by a Scottish rubber baron back in the day. Now it’s just a weird out of place structure half in ruins and inhabited by birds.