Skip to content
This month, we are house sitting in Gibsons, BC, Canada, on what is known as the Sunshine Coast. Because it’s January, the sun is not shining much on the Sunshine Coast and we are staying indoors enough to induce Cabin Fever. One good thing about Cabin Fever: it forces you to undertake projects that have been lurking in your head. For both Josh and me, that means more writing and cooking.
In particular, I am determined to make Sichuan food at home. It ranks up there with the cuisines that are rare to find done well in restaurants (Thai would be another). If you like Sichuan food, it’s not as difficult as it would seem to make a few dishes at home.
Although there is one fair Chinese grocer in Gibsons, we stocked up on core ingredients at T&T Supermarket in Vancouver. There are two dishes I was most interested in mastering: dan-dan noodle, and Sichuan style lotus root.I prefer to use all ingredients fresh and whole. T&T Supermarket has fresh lotus root, but when we were there, the roots looked old and bruised. So we opted for a packet of brine-soaked pre-cut lotus root. You can find it in the refrigerated section. I didn’t save the packaging but it looks like this: 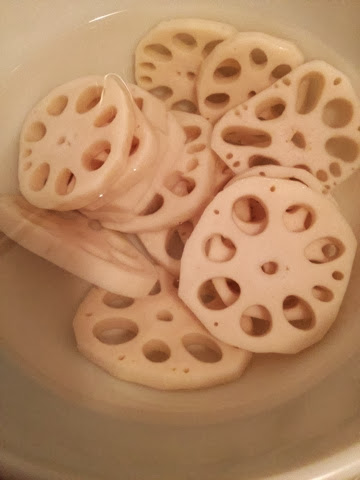 We made a few different lotus root dishes, my favorite of which was a quick, high heat stir fry with ginger and scallions: 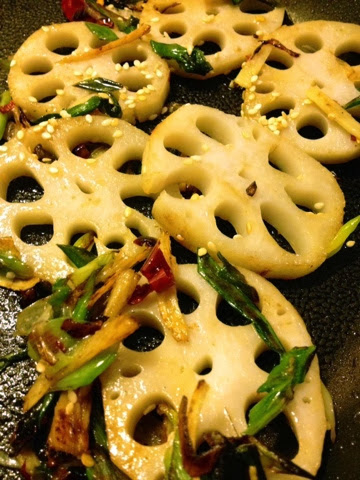 We also made a Sichuan version with a more distinct “ma-la” flavor, which is described later.

We bought two types of fresh noodle, learning later that dan-dan works better with dried noodle. Fresh noodles can be too porous and starchy for the mainly oil-based sauce. However, we fared pretty well with these: 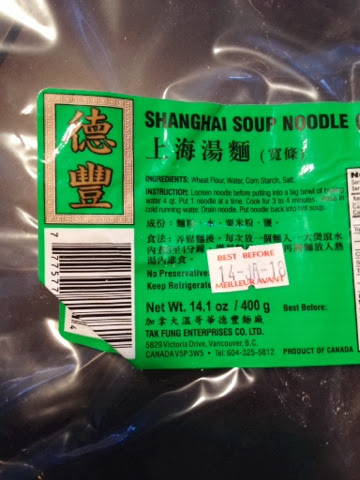 A vigorous shake with chopsticks while cooking breaks up the clumps that can form when using the fresh noodle.

The core ingredients in Sichuan dan-dan noodle include garlic, green and red Sichuan peppercorns (huājiāo 花椒), peanuts, sesame seed, dried red chilis, and homemade chili oil.  Some interwebbing revealed that something called Douban paste is a core ingredient. So we returned to T&T Supermarket and found a tub of Douban paste, which is a salty fermented broad bean paste with chili. 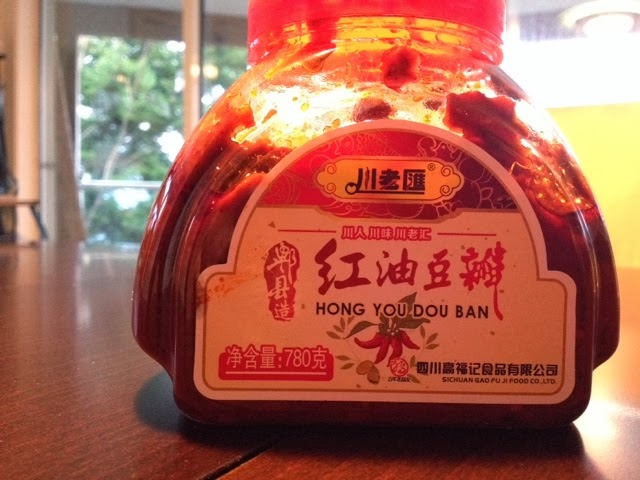 I made my own chili oil by toasting some dried red chilis with star anise, adding a bunch of canola (peanut would be better here, but canola is likewise tasteless), and blending it up before letting it sit for several days. 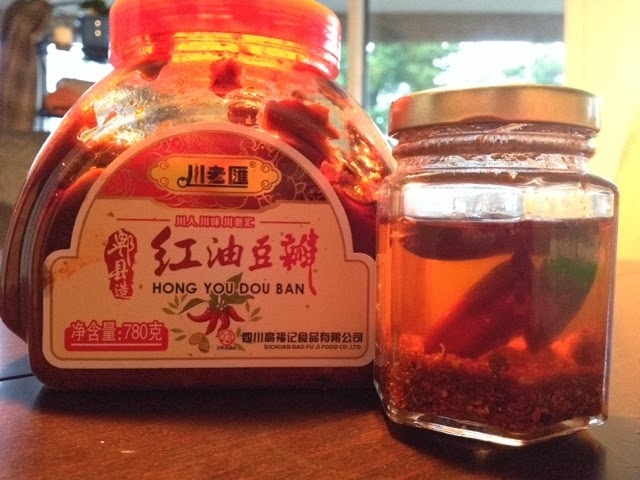 My dan-dan is meatless, because I don’t cook with meat at home. Traditional dan-dan noodle has minced pork but it serves much more of a texture dimension than flavor dimension to this dish and I do not believe it to be as necessary as people say. Minced pork, like any minced meat, is tasteless. You might as well use carne de soya (textured soy protein), which has a similar mouthfeel. I don’t even bother with that in dan-dan.

The tricky part is assembling the dan-dan noodle. Basically, I wanted to make a dry-ish dan-dan noodle. Some restaurants make a soupy dan-dan, which can be tasty, but I really like the versions that are coated in the oil and paste rather than swimming in a spicy peanut butter broth, which is not authentically Sichuan.

As with most noodle-oriented dishes, the noodles should be cooked last. I usually put the water up early to bring it to a boil, so that when all the other ingredients are cooked, there is no waiting around.

So, I have several pans on the go. One is for dry-roasting peanuts, sesame seeds, and whole red chilis. 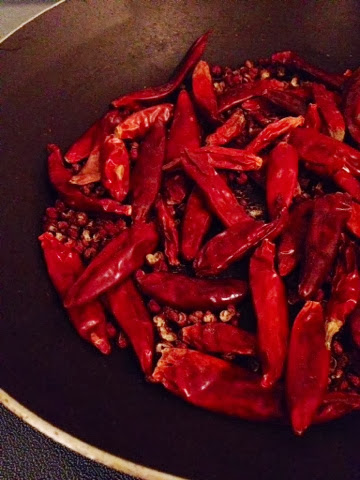 The other is for sautéing. My twist on dan-dan is to saute onion, ginger, and garlic and add it to the noodles when tossing. Today I added some medium-firm tofu as well. I really liked the additional texture of the tofu, even if it is not a traditional ingredient it is fun to create your own dan-dan version or style like many restaurants do anyway. There is no “right” way of doing it, really. Just please do not skimp on the hua jiao or the chili.

The third pot is for the boiling the noodles of course.

One major challenge: We do not have a mortar and pestle in the house! Josh came to the rescue with a rolling pin and heavy large cutting board. We placed a handful of sesame seed and Sichuan peppercorns on the cutting board and Josh rolled it until the seeds were smushed and beginning to stick as the oils from the sesame seeds helped create a sort of paste.

Then in a bowl, I mixed a healthy tablespoon of Douban paste, a few tablespoons of chili oil, and a teaspoon or so of vinegar. The vinegar is really necessary for balance. All we had in the house was cider vinegar and it seemed to work well. Just don’t use too much.

I added the rolling pin mixture to the Douban paste/chili oil mixture. When onion, garlic, and ginger mixture is done and the dry roasted peanut, sesame seed, and dried chili mixture releases aroma, it’s time to start cooking the noodles. Just use your best judgment. Fresh noodles cook very fast. Stir often with chopsticks to prevent clumping. If using fresh noodles, it helps to cold rinse after draining to prevent further clumping and “set” the starches. 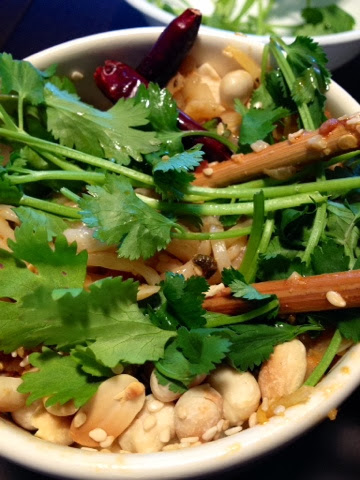 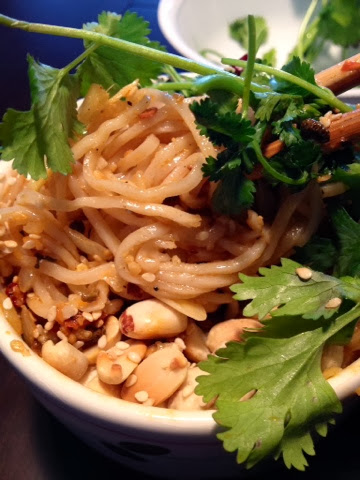 For the lotus root, we kept it simple. The key is the chili oil and lots of hua jiao. It was hard to infuse the “ma la” magic flavor into the lotus root without directly putting the hua jiao on the plate. Crunching a few seeds now and again is ok, but the husks are more annoying than popcorn husks if you eat a lot. This is becoming an ongoing challenge, as we undertake this month’s dan-dan project.