Skip to content
In the ±2 years since I was last here, BC law changed in favor of beer. A score of new micro, nano, and pico breweries have opened in Vancouver unleashing a wave of creativity in the market. Brassneck is one of the best.It’s on 5th and Main, and the staff is surprisingly warm and friendly, in a city characterized by hipster snobbery.

Brassneck’s communal seating should be conducive to eye contact and smiling. I look around often for a sign of life. Unfortunately, Vancouverites haven’t caught on to the idea of socializing in bars. Give ’em another ±2 years, maybe they’ll catch on.

Cheers to Brassneck, though. They are establishing a new benchmark for both quality and variety of beer, and are easily one of the best of the many new micro, nano, and pico breweries in the lower mainland. I would probably classify Brassneck as nano. Not enough output for bottling, but enough for growler fills and a happy taproom. And the key here is the variety. This is not your typical, “We have an IPA, a pale, and a stout” brewery. They often rock experimental brews, like today’s Magician’s Assistant, brewed with pilsner and wheat malts, Brettanomyces, and lactobacillus. The result was a Floridaweiss-ish passionfruit-forward thirst quencher that suffered only from being unsettled and yeasty. They also have on Cereal Killa, a stout brewed with Cap’n Crunch but thankfully doesn’t show it. The collaboration (with Parallel 49, another Vancouver picobrewery) does, however, impart a moreish sweet-n-salty finish like a breakfast cereal would.

What I like most about Brassneck is their variety and heavy rotation. You can pretty much show up once a week and be guaranteed a new brew. It keeps the regulars happy, and it shows that their brewers are having fun and willing to take risks. Even when a beer is less successful, you can taste the effort. Because they change the lineup often, we tend to always share a paddle or sampler tray. Four 6oz glasses for $8. 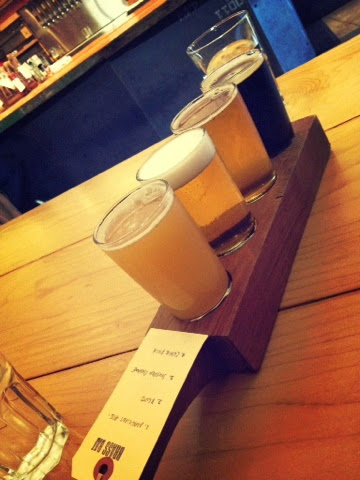