I am a pure half-breed. One of the only Jewsies (half Jew, half Parsi) to have ever lived. I’ve been told I “look like a shiksa” and “look like my dad,” which are two totally contradictory statements. I have been mistaken for Greek, Turkish, French, Arabic, Punjabi, Italian, Nepali, Malaysian, Balinese, Latin American, Iranian, Indian, and…my personal favorite…”Chinese from far.”

Let’s look at the bright side. Instant noodles can live the life of an international spy. They can be dressed up to resemble real food. They don’t really belong anywhere, but they can pass everywhere. They might have been invented in Japan, but instant noodles are global ghetto food now. Like me, they belong to the world.

The extent to which I’ve taken this instant noodle eating is cause for concern, but you must understand how much fun I’m having with it and its extended metaphor. We’ve a long way from blintzes and bhel puri. When life gives you instant noodles, rock it. Sex it up. Be happy with what you have. 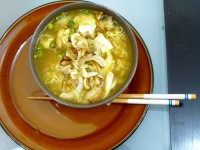 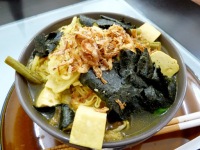 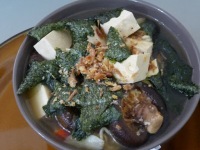 In all seriousness, sexed-up ramen is a go-to international emergency meal. Next time you’re stuck in a place like Easter Island, on which small convenience stores that sell instant noodles provide the only means by which to self-cater, remember how easy it is for instant noodles to pass for real food. With a little creativity, you can turn that plastic package into a symbol of pride.

*This post previously appeared in my blog “A Single Step,” and was written while eating a lot of ramen.