The Guinness-Anchor-Berhad (GAB) Brewery is the size of a automobile manufacturing plant, in the suburban styx of Kuala Lumpur. Kennhyn Ang of BeerBeer arranged a brewery tour for the two of us, and about half a dozen others. The BeerBeer crew gave us a ride from the nearest metro stop–which is the eponymous end of the Kelana Jaya line and 20 minutes away from the brewery.

When we arrived at the security gate, we all got out of the car to let them check our temperature for H1N1. Then the security guard pointed to Josh’s sandals and then told us to wait across the street under the blazing mid-day sun, in the parking lot, with no breeze, no cover, and no sign of life.

The uncivilized situation got worse before it got any better.

What kind of business makes their guests, who have an appointment, stand around outside in a parking lot?

I knew right away it was not for safety regulations they wouldn’t let us in. As a female, I was told my sandals were just fine. Something similar happened to us once before at a bar in KL with a dress code. In that case it was fine; we hadn’t traveled to the end of the earth to visit the bar and also it’s understandable a bar might have a dress code. But an industrial brewery? No one told BeerBeer when they booked the tour that there was a dress code. Besides, Josh wore classy men’s sandals that actually cover a lot of his feet, not flip-flops.

Told it was the sandals that was the problem, one of our friends was kind enough to lend Josh his closed shoes. Assuming the best, we then walked to the pub area and waited for the tour. But here we also sat around again in an empty bar room waiting and waiting with no offer of water, or beer.

Management did not speak with us directly, instead using Ivan Pinto the tour guide as their intermediary. Pinto dutifully apologized and told Josh he had to stay back because he was wearing shorts.

WTF? First it was sandals and now shorts. Our intermediary said they won’t make any exceptions and they can’t find a cloth to put around the offending calves. He also pointed at the security cameras to let us know “they were watching.” In an attempt to maintain an image of appropriate fashion for brewery tours, a couple of low-level management dweebs insult their visitors and create a bigger PR problem than shorts or sandals ever could. No wonder they did not have the dignity to come out of their puny offices and talk to us themselves.

I offered to wait with Josh in the holding area, but one of our friends had already been on the tour so he kindly volunteered to wait with him. They did not even offer to give Josh a beer–he actually had to ask to be served while he waited for us.

I did not want to go on the tour on principle but was encouraged to by BeerBeer and Josh–and I’m glad I went because I saw a robot. A real one, not GAB management.

The tour was actually quite good, as the guide was a former chemical analyst with the brewery and mentioned things like diacetyl and alpha acids in hops. The non-dumbed down approach worked very well and was more in-depth that I’m used to even from microbrewery tours.

Until yesterday I had only been on one macrobrewery tour and that was Pisner Urquell’s Beer World, which is much more professional and set up for visitors than the GAB was.

BUT, GAB did offer something that many breweries–micro or macro–do not: Free-flow of beer after the tour. That’s right. Free pints of Guinness, Kilkenny, Heineken, and whatever else they keg up at GAB. Sources say they are stopping this policy in the future. They should think about stopping their inconsistent fashion policy instead.

The after-party was fun enough to erase the unpleasant memory of the anonymous, cowardly fashion police.

Also on our tour was a Scottish gang come to town for a wedding party. Learned a Chinese toast (the Yam Sing) that was very cool and exchanged email addresses with an Edinburghian, given Josh and I might shack up there soon.

Then a group of about 100 people came by for a brewery tour. They were wearing some kind of uniform, I assumed from a corporation. I decided to ask one of them where they were from and they said, “Hash House Harriers!” 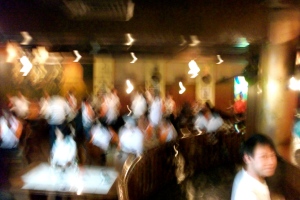 AWESOME! The H3 was started in KL in the colonial days as a sort of running club for overweight alcoholic British expatriates. It’s exactly what it sounds like–you run, then you binge drink. The club evolved to where chapters can be found all over the world. My first encounter with the H3 was in Bali, where lots of the expats and a few locals do the runs and the piss-up afterwards. Here were no orang putih, I think the entire group was Chinese-Malay from Johor Baru. 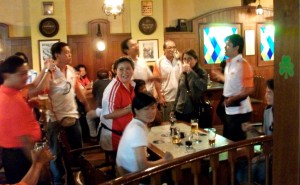 They were the friendliest people–the exact opposite of the management of GAB. They ushered me to a seat at one of their tables, introduced themselves with their Hasher names (like “Furniture,” “Rabbit,” and even “Ganja”). I asked Ganja if he liked to pass the dutchie, making the universal toking sound and gesture. I’m not sure he knew what I was talking about. 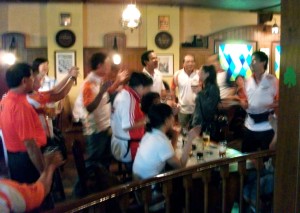 They kept fetching us more drinks and chatting, and we sang some drinking songs together before the bartender called last call on the freebies and sent us all home. I was too busy having fun to take any pictures but Josh got a few.

Afterward we went out with Kennhyn and friends to eat bat kut teh (good Chinese grub). All’s well that ends well. Get a life, fashion police. 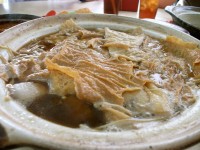 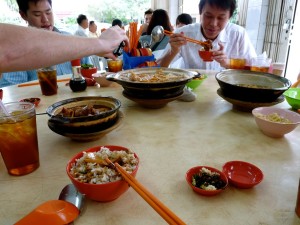