Time to say goodbye to Bonnie Scotland and we intend to finish with flourish. For us that means drinking as much as possible in Glasgow, while remaining a beer or two behind a hangover. Tough job! 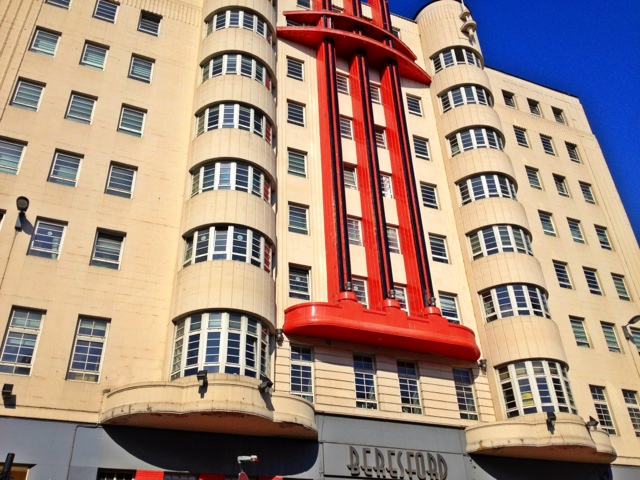 It’s especially tricky to be sober in this town, as Glasgow has some of the finest pubs in the country. 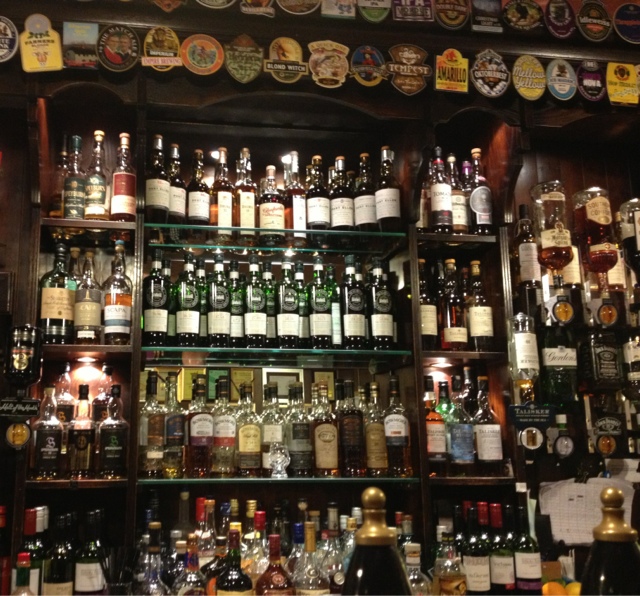 Feeling lazy the first night after a grueling travel day, we patronized the closest restaurant to this night’s downtown pub crawl. 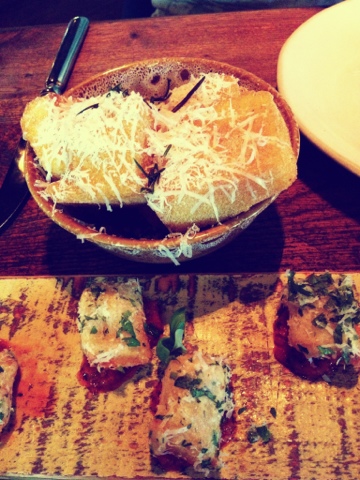 Jamie Oliver’s Italian. I know, I know…The ambiance was horrendous–cookie cutter chain gang with artificial smiles. But my pasta was made well, even if overpriced. Noshes were alright: fried gnocchi and polenta. The polenta was too dry, but the fried gnocchi were playful and tasty.

Glasgow is an impressive and attractive city with a lively young vibe. I like it a lot, as it is a place that warrants lots of digging and probing. Glasgow is not going to present itself to you on a silver platter. It needs you to engage it, to ask questions, to be open. 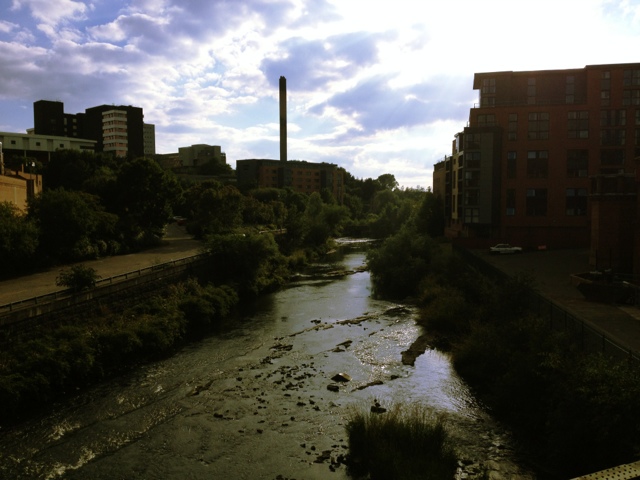 Night two of three we fared better for food, after some diligent poking around.
Banana Leaf is a Keralan hole-in-the-wall with formica tables and no fanfare. 90% of their business is take-away. The few who eat in house will occupy one of three tables in this authentically Indian joint. Tiny laptop speakers mounted on the walls were beyond their limits to inflict the tinny distorted sounds of bangra played too loud. Tribute to an educated Glaswegian populace, no diner so much as winced. The food at BL was solid. We ordered a Mangalorean style channa gussie, a tamarind-based fish curry, and a thick coconut green chili stewed chicken. I normally don’t eat chicken but had a feeling about this one, and the risk paid off. Each dish had its own unique flavor profile. They blended together well, with the balancing grace of lemon and tamarind.
Third night we ate at another place called Banana Leaf. Only this Banana Leaf is a Malaysian restaurant. 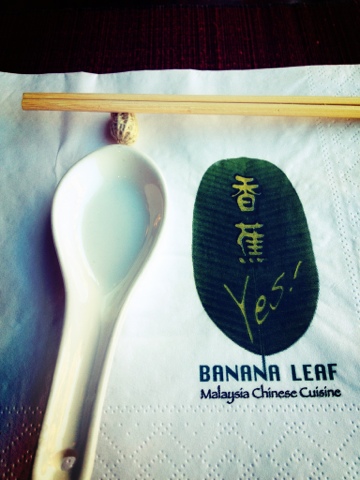 I liked this BL instantly as well. It could stand its own in a Petaling Jaya mall. The presentation of chopsticks on the peanut set the stage for a super last supper. 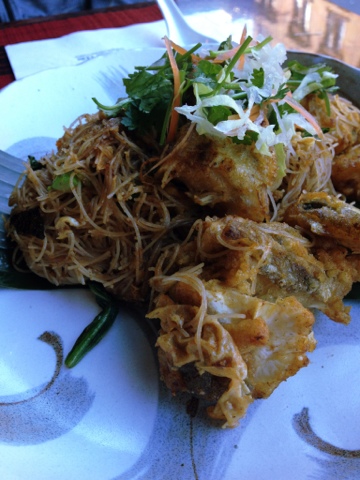 We ordered three things. Portions were suitable for the price. Fried fish head, with fried mee hoon, curry leaf, and cilantro. The presence of this dish and a fish head curry on the menu made me happy. We also ordered kankung belacan, a mainstay Malaysian veggie dish, and the house laksa. 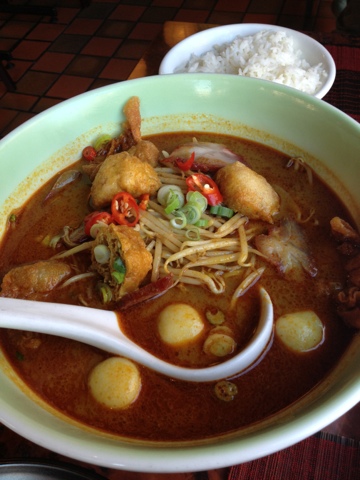 The laksa was really satisfying. It was somewhere in between Sarawak and Singapore laksa–creamier and richer than Sarawak but more of an earthy vibe with hints of cinnamon, nutmeg and other warming herbs in the spice profile. This was not not made with a paste. The entire meal was a delight, as were the friendly staff from places we have fond memories of in Malaysia. 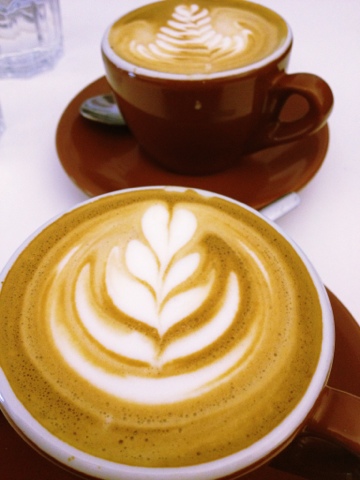 Aussie-style geek coffee is slowly making an impact in Glasgow. We hit up three of the top coffee spots: Artisan Roast (partnered with the Edinburgh hot spot), Paper Cup, and Avenue G. The photo above is of Avenue G’s flat white. It was my favorite place of the three overall. The coffees at Paper Cup were a bit disappointing. I tried the Aeropress of the day, an Ethiopian bean, and found it thin and bland. Josh’s piccolo was too milky. A milky piccolo? Artisan Roast’s piccolo was quite the opposite–intense–and delish.

And we did fulfill our goal of drinking a lot of whisky and beer. We hit up more than a dozen different pubs in out three days including a few we had not visited when we were first in Glasgow three years back. Those new to us included the putstanding Pot Still, a whisky-focused bar to rival the venerable Bon Accord; and several solid Wetherspoons like the Counting House with its cuppola and 19th century neoclassical interior. Like many Wetherspoons, Counting House is a former bank. 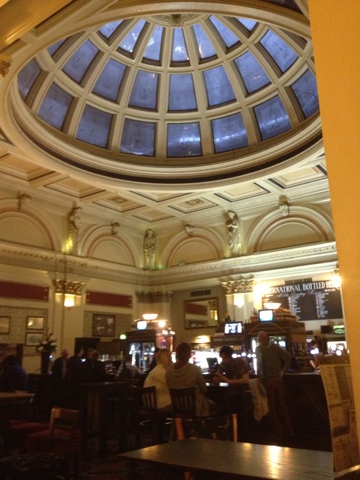 Finally I just want to say Happy New Year, l’shanah tovah to all my tribe members out there. Had a magic discovery at the Bon Accord: the Jewish Whisky Company based right here in Glasgow and cellaring some fine, fine single malts like this one: 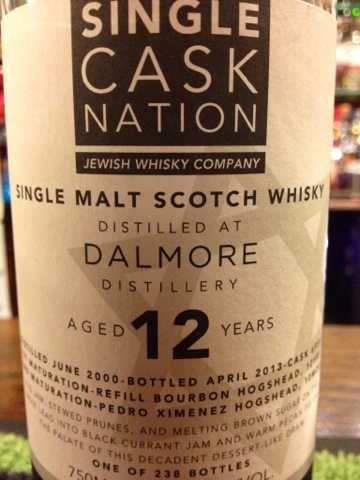 We sampled three Jewish Whisky Company bottlings, and all were super. The Dalmore was the richest and tasted like apples and honey, and honeycake. Great way to ring in 5774.

Today we kiss Scotland goodbye and say hello to Malta: new country for us both.